A title would be helpful. A good start.... 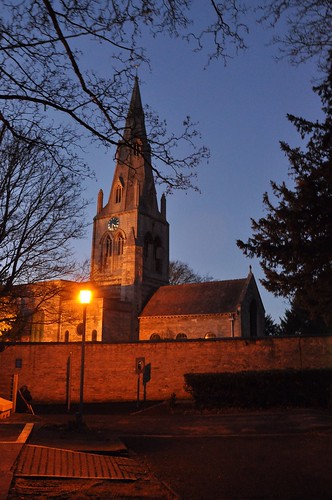 A new year has dawned, and I have to tell you that I did not wake properly until after 9am this morning, and I did not get out of bed until the Concert from Vienna started on BBC2 at 11.15am. Anyone would think I had been out all night partying.

Mother fell asleep early on the couch. David then fell asleep upstairs. I then clearly fell asleep as well, until Mum woke me to tell me midnight had just passed.

I may be getting old. OR, I may just be out of practice. I can get the energy back. I will practice.

A new year means all things are possible.

And now back to Christmas.... 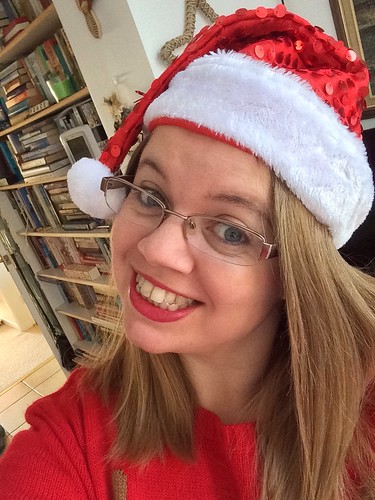 My daughter-in-law in her Christmas finery. No, I didn't ask permission to post her photo. She looks lovely. Done.
I did refrain from posting the full photo of the pjs. That may yet happen.

Now, those of you who have been around for a few years will know that in our village, Carols on the Square is a big event. Every year, all roads through the village are closed from 6.45 - 8.15pm on Christmas Eve, and thousands gather to sing carols organised by our village Churches Together team. Our friend, Jon, who heads up our local music organisation, is conductor of the brass band which plays, and every year it grows bigger and better. We have all ages playing and all levels. One of the trumpeters plays on the greatest stages in the world, and then there are kids still at school. Students, head teachers, business men, Mums. Anyone who can play well enough. Their music is superb. 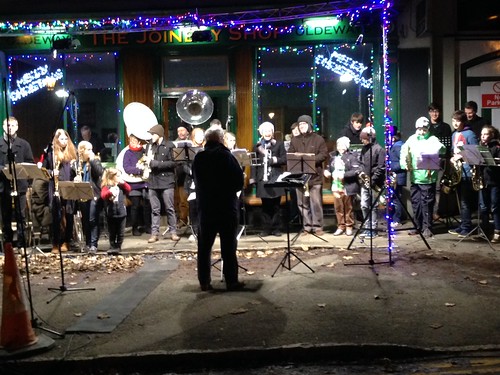 PA systems, lighting, mixing - all taken care of by volunteers. Marshalling - volunteers. And, most people go. This village has a population of over 6000 people. And they walk down and walk home. Well, not me, but I have an excuse.

So, this year, it was Andrew, Ann, Missy and me. We parked at a friend's home and walked the rest of the way. Andrew and Ann met up with friends, and after it all, I brought the scrap home and they went off to catch up with the friends for the rest of the evening. 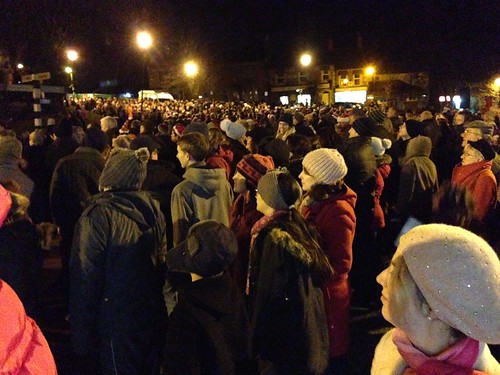 We were standing right at the front so I could be away from the loudspeakers, and earplugs did the rest. I love going. So do we all. The sound of the carols, on a clear crisp night, being sung with such gusto is just magical. 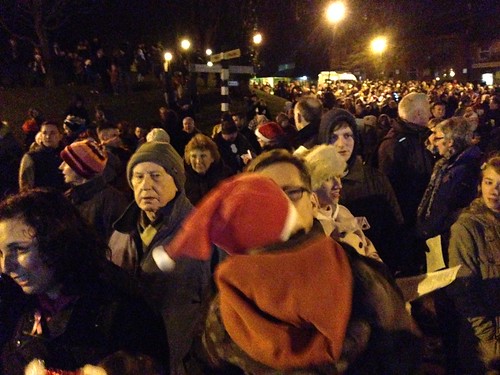 And then there are fireworks at the end, after the carols, readings and a short address. This year, one seemed to go horizontally around the churchyard instead of up into the air, but that was only one of the many fireworks which took off. One little girl was very excited by it all, on her Dad's shoulders. The little one in pink below. Our little one. (Who lost a tooth this morning, so that must make her a Big Girl now.) 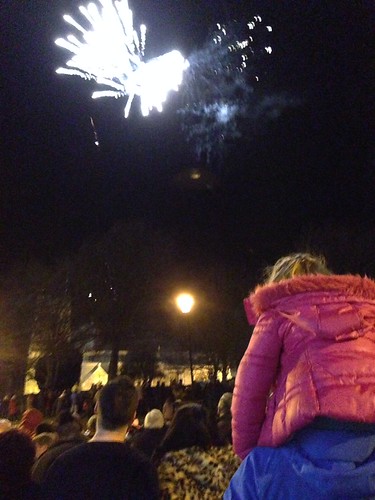 Photographing fireworks is not easy. I think Ann took these, or maybe I took one. Whatever. Fireworks. Many people and a great way to prepare for Christmas. Then of course there is also the possibility of the midnight church service, but we missed that one this year. Christmas morning is when we definitely go. 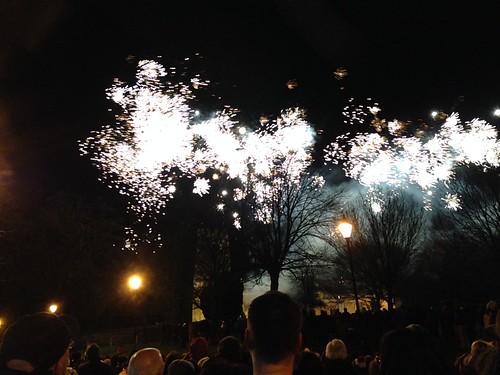 There were so many things I thought of asking you all before Christmas - like do you have wish lists which you show people? For things like Christmas? Birthdays? Do you do secret Santas with your family?

My children have always written to Father Christmas, but usually on Christmas Eve. A "guided" letter when they were tiny, graduating to a hilarious missives as adults, which have everyone rolling about at the flights of fantasy, and the epic FC replies on Christmas morning as we listen to Kenny Rogers sing Oh Holy Night. Traditions, people. My children try hiding it, but Christmas here includes Kenny singing Oh Holy Night. It is, I have to say, a beautiful version of my favourite carol.

So many in my family come from warm climate years, and they prompt so many memories. There are always triggers, you know, and I hear myself saying "Do you remember....." and it infuriates my children, who do prefer the "now" and to keep the "then" back where it happened. Then.

We may be similar, but we are also very different. And naturally, some of us (me) (Mum) have an extra couple of memories to live with. Decades do that. You can't get rid of them. I don't want to either.

Anyway, about the wish lists. We don't have them. I may ask everyone what they want, and I do know that some of us are way beyond the "stuff" part. `Something useful . I love the WANT, NEED, WEAR, READ idea for children. I truly do believe that Christmas should not be a time of great excess. Gifts should be  smaller, scaled down, and giving should be encouraged. Making, sharing. There is time at birthdays for bigger stuff.

I wish I had thought more about this when I was a younger mother.
I am now reformed.

I try to identify needs when I buy gifts. I like part to be a surprise. I try to think of something different.

It can be impossible.

Each of my children responded with the word "Nothing" when I asked them what they wanted. I told you they are difficult. And I cannot remember when or if I was ever asked (by the family) what I would like as a gift. Geoff and I didn't do that - he was away most years. A couple of friends do ask me around birthday time, but `I never know. So the concept of lists is a strange one to me. I don't know the music my adult children like, I don't know what 2 of them read, I do know my mother loves puzzle books and wool, and our gifts are usually smallish.

I make biscuits for the friends, and usually an ornament, only I didn't get around to that this last year. I am going to fix that this year. There will be a handmade Christmas ornament from Linds in 2015.

Does that count as a resolution?

Tomorrow we will talk about my word for the year. It is a strange one.

I will be back.

My kids' eyes roll when I like to reminisce. That was an exercise best left with my elders...my mother and I were very good at it.

It amazes me that six thousand people gather to sing carols. I would love to hear it...any You Tube available?

For us, Christmas is as big as it can be and birthdays are very small.

My tree is still sporting a very special ornament from over the pond. Your friends will appreciate your New Year's resolution. I'll be back to read more about your unusual word for the year.

We were asleep way before midnight as well. I was happy to see that the new year did indeed arrive in spite of my sleepiness. Your DIL is darling. Love the Santa outfit!

I can't believe Missy has already lost her tooth. She could have sung the song, "All I Want for Christmas is my Two Front Teeth" if she had lost it a little earlier.

Most of us in our family have Amazon wishlists. You can't have too many books, can you??

And we did Secret Santa with my brother and his family. I got some bits of fabric from my niece. Excellent!