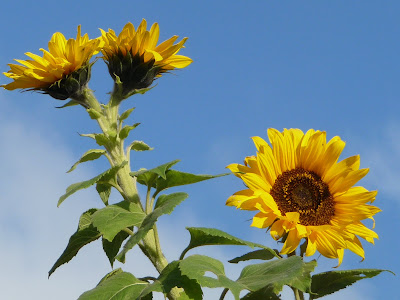 There once was a Sunflower.

It grew tall and strong and then one day, a strong wind came and snapped off its beautiful big head, just as it had started opening its petals to the sun it followed each day. And the Gardener was sad.

So the big strong stem just stood there. The Gardener went away for a while, and often thought of her Sunflower which was cut off before its prime. What a waste, the Gardener thought. All that care, and all the protective ties to the stake had not been enough. Other sunflowers grew, and each of them had one beautiful head, but none were quite as big or splendid as the Sunflower which snapped.

And then the Gardener noticed something special. On each side of the Sunflower's stem, little shoots appeared, and then one day, a small sunflower appeared. And a few days later, twins arrived too! Not one beautiful sunflower, not two, but three!

And the Gardener was happy.
Posted by Linds at 6:28 pm

Exactly my thoughts when my dahlia was snapped off at the ground and it grew back with great beauty - right now there are 5 beautiful blossoms out there in all their autumn glory. Something beautiful out of something sad.

I have this happen in my garden too and over the years have learned that a loss can bring such great beauty. I usually learn my lessons in the garden as I prune away. Love you and have a great weekend. Love the triplet sunflowers too:)

Beautiful analogy...and love the pictures. Thanks for sharing.