"In the old days" long long ago, aka when I was at school, we did Arithmetic at Junior School. We graduated to "Maths" when we went to High School, and that had all the complicated algebraic and geometrical bits added to the study of numbers. But when we were small, it was the simple study of arithmetic. Does anyone actually use the word any more?

There you are - addition, subtraction, multiplication and division. Oh, how I loathed long division. Multiplication was a doddle. We had those tables drilled into our heads so well, that it was easy. And mental arithmetic meant many many fast tests to wake the mind. When my youngest son was at school, I remember having a total conniption when I found out they were being taught multiplication by counting. 2, 4, 6, 8, 10, 12 etc . That is the 2x table. So I barrelled in the door and asked how they were supposed to know their tables when they learned that way. That, I said, was counting in 2s. Using fingers. WHAT? So if I asked him what 9x2 was, he would gaze into space saying 9x2, 9x2, 9x2, waggling his fingers about......... hmmm. NO YOU DO NOT KNOW YOUR TABLES!! It should be instant. Well, said the teacher, I never learned mental maths when I was at school. I just looked at her. That, I said, is not my problem. My problem is that my son and all the other children in the class are required to know mental maths and that includes tables.
Sigh. I am old fashioned. No-one learns tables the old way any more. It is all about counting, and calculators, and fun, and while I am the first to say I want my children and grandchildren to love learning to have fun and to enjoy school, I also refuse to allow the fun to be the paramount goal. Surely it should be the acquisition of knowledge and being educated?
So I taught him his tables instead.
When I was teaching, I covered many Maths classes. The head of Maths asked if I would teach a few classes, and I told him he must be out of his mind because the last time I did any formal Maths was in 1971, possibly before he was born. Ah yes, he said, but you were taught right. This was secondary school Maths he was talking about. Mind you, I had huge fun teaching it - we used to have races - me working things out on the board or mentally, and the kids on the calculators. I won. Every day. They could not believe it. I am a genius, clearly. My old headmistress would be rolling in her grave if she heard me say that. My maths skills were average, to say the least back then.

Before our Matric exams, which were public exams, set by boards, we had "voluntary" Saturday morning extra Maths classes with the head. She terrified the wits out of us all, so attendance was 100%. And when she walked up and down the rows of girls trying to do the problems she set, you frequently forgot to breathe. I remember her hand appearing over my shoulder, and a huge tick which went through about 27 pages of the book was scrawled and she bellowed "But CHILD (I was 17) You CAN do Maths!". Oh the relief. I could. I did. Do Maths.
Marge, my sister, was the Maths whizz. She was a Maths teacher before she married Peter and moved hemispheres. She loved Maths. I can't say I ever actually loved it. But I still remember BODMAS and all the other acronyms. I was really delighted when I googled it to see if the Internet still used it and there it was.

How many of you used a slide rule? Until the advent of the calculator, which was after I left school, we used slide rules and..... 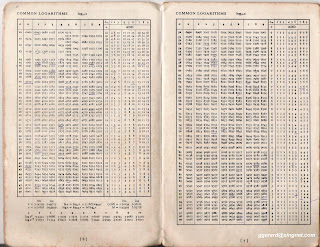 heaven help us, the log tables. Logarithmic tables. I think I still have my book somewhere around, but I have not got the faintest clue how to use them any more. Do you remember them?

When I was at school, we had brown school suitcases  just like this one below to carry our homework to and from school. They fitted onto bicycle carriers well too. And made good seats when waiting! I am sure there will be more school type memories. This was me on the first day of school in January 1960. And for the next 12 years I wore the blue uniform.........

My 10 yr. old grandson and I just had a discussion about his lack of knowledge of multiplication and addition tables! He keeps telling me that he doesn't have to know them, and I keep insisting that he WILL learn them.

I get so irritated by Ohio's educational philosophy of "teach for the test"! I'm seriously starting to consider volunteering to homeschool my grandchildren so that they will have a real education!

I recently astounded the check-out girl by adding up the items (correctly) in my head - I was worried I hadn't enough cash - as she put them throuh the till. I was never a Maths whizz but mental arithmetic was compulsory all through school - and of course money was ponds shillings and pence too. I remember log tables - I was forever leaving mine at home or at school - but I don't remeber how to use them!

Can't type or proof read though - I mean't pounds and remember, of course. (Well I have just had my arm released from six weeks in a splint?!)

I was a pure dunce when it came to arithmetic/math. My mother would tutor me and tutor me and I would just get a faraway look in my eye and head for Prince Edward Island or something. That's why I was thrilled when both of my children took to the subject so well learning their times tables the old-fashioned way through 12 no less, not that that's so hard, but we stopped at 9. (They both attended a private school as they never would've had that education at a public one.) Glad that you were a stickler where your children were concerned. Slide rule? Yes, I remember. What a horror show!

I remember memorizing the "times tables" and to this day they come to mind instantly. However, my math skills ended with basic math. The other stuff is beyond me and I rely on either a calculator or someone else's brain power.

Oh yes, Maths, how I hated it! We used to have separate maths lessons; ordinary maths, algebra, geometry, trigonometry. And ,as if that wasn't bad enough we then had to learn solid geometry and solid trigonometry.
I hated Maths with a passion and what did I end up doing in several of my jobs...finance! And one of my first jobs was in an Accountants office, where I learned to add up huge columns of figures really quickly!!

I don't think anyone uses the word arithmetic any more. I got very irritated when I realized how early they were allowing kids to have calculators in their desks. My girlies are learning their tables, but it's a struggle.

I am afraid I don't do math in my head as easily as I used to. I'm anxious to see if algebra is still hidden in there - I was excited when Kristen was in 8th grade and I could still do it - but that was awhile ago and my brain is much older now!

Math was never my strong subject...I did it well enough to pass and stay on the honor roll. But never did I excel...and I often needed tutoring before a test. My boys on the other hand are brilliant when it comes to math. My Squirrel is nicknamed the "human calculator" because he is so quick doing it in his head. I much preferred to read...

I remember log tables and having to work out money problems in pounds, shillings and pence, but we never had to use slide rules. I loved arithmetic and maths in general, and still occasionally add up entire supermarket trolleys in my head.

I remember slide rules and logarithm tables, but like you, I don't remember how to use them. I didn't really enjoy math until I had a great teacher in high school who made it interesting and understandable. In fact, I took an extra year of math even though it wasn't required because she was the teacher.

My 2 are 6 & 8 and oh how I agree with you. I am sure there will be things I will teach them as I feel they will be missed. Sometimes I am not sure if they are being missed because it is what I am expecting or it is something they just don't cover in NZ. Being UK schooled I know what I expect which could be different to what they do here. However my kids will know numbers even if we have to talk about them everday for life!