6 years ago, in August 2005, the Swiss village where my sister lives was devastated by floods. A landslide destroyed the road and rail link to the outside world,and the only way in or out of the valley high up above Luzern, was by helicopter. You can read about it here.

Marge's house is in the centre of the village, across the road from the sports hall, and, when the emergency personnel decided in a moment of sheer madness, to pump out the basement of the sports hall into the field across the road, that water tore through Marge's garden, and straight through her house. You cannot believe the devastation. There was no electricity and a frantic attempt to get as much as possible up the stairs to the first floor - to save what it was possible to save.

In the aftermath, the garden was covered by tons of sludge which the army came to remove, and people came to help rip up carpets, flooring, doors and all the furniture. And the scene was repeated in so many homes. It was a nightmare. And it took a good year or 2 to get the house restored to the beautiful home it was, and is now. And the garden had to be started from scratch.

The village learned that the river defences had to be strengthened. So they have built bridges higher - the old ones were swept away by falling trees and boulders from the glacier and the mountains which surround Engelberg. And the mountain side of the river was designated flood plain, to protect the village.

Today they were tested.

I had a call from my brother-in-law early this morning to say that the mountain was being evacuated as the river was about to burst its banks again. The exact same weather conditions prevailed. Torrential rain for the past 24 hours, combined with the fact that the temperature at the top of the mountain was ABOVE freezing, meant that the water fell and raced straight down the mountain, without freezing. 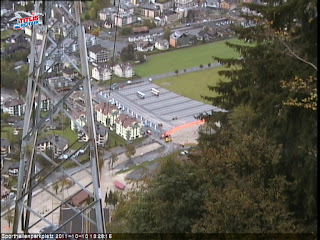 I spoke to Marge, who was at work down there in the bottom left hand corner of the photo, at the base of the cable car up Titlis, the huge Alp. See the water? It was hip high in places. That car park in the centre of the photo was half covered at one stage, but the emergency workers managed to keep the water at bay with sandbags and flood defences. The sandbags were useless outside the cable car station. That is the river, and that little bridge was the most important one to keep open. Water came into the building, but they managed to save the stock. But tomorrow - well, the clean up begins.

But the defences held. My sister's home is safe this time. I, of course, have been glued to the live cam images most of the day - until I knew she was safe and home. Dirty. wet. But safe. I have aged another 10 years. But 2005 was not repeated. There may well be some homes which have been flooded again, and for those people, the nightmare will be repeating itself, but I am sure the people of Engelberg will help their neighbours.

My quest for a tranquil existence is failing miserably. There I was, all ready to potter round the sewing room, go to a doctor's appointment, and relax. Hah. I am destined to live a life resembling and earthquake graph. A BIG earthquake. Mind you, my sister's life is just as jagged. Sigh.

Oh dear, what a relief for you and your sister. But how very stressful.

I'm so pleased our sister's home and her lovely garden wasn't affected this time but of course it's awful for those who weren't so fortunate.

I hope you're feeling better after what must have been an terribly stressful day.

Oh I am so glad that a repeat was not to be. Phew.

(Sometimes I feel as if I have dealt with so much that I am raw and if one more thing goes awry, I will go up in smoke. I'm in need of the balm of the Holy Spirit at such times.)

I was thinking of Marge too. We had one flood about12 years ago and it was dreadful - and that was just a little one and it didn't go right through our living room... Glad things are OK. She could have done without another bout of devastation I should think...
H xx

So glad that your sister is safe. Some memories are not as much fun to explore as others, are they?

Pleased to hear your sister's house was spared this time round; the news is still fairly grim - it's unusual to have had the rain and storms and run-off from the snows, too, at the same time. Even the efficient Swiss sometimes reach their limits! I hate to think how other countries would cope (or not).