Is it just a few days since I complained about the lack of sun????? I take it back. Since Saturday, it has been unbearably hot. Humid type of hot. The kind where you need a towel tied to your waist to mop the brow every 10 seconds in a wholly unattractive fashion. Make up is redundant. You put it on, and wipe it off immediately. Fans are more precious than gold. Prostrating one's self on the kitchen floor tiles is also a considered option, but I would need a block and tackle to get up again. You get the picture.

The allotment ground has turned to concrete. Mention is now being made of a plough before rotivating. I have visions of oxen here, that seems a trifle excessive, but I know nothing. Roses are blooming everywhere, and dying a day later in the heat. I know I come from Africa, 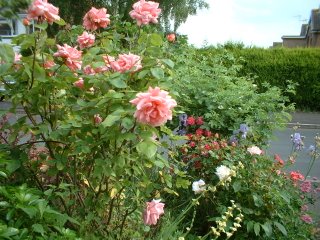 but the heat there is higher in temperature, but bearable because in Cape Town there is little humidity. Wind. I want a cool breeze!

Sigh. I do seem to complain about the weather a lot. It must be in the air in England. I am off to find an ice cream.
Posted by Linds at 5:35 pm

Email ThisBlogThis!Share to TwitterShare to FacebookShare to Pinterest
Labels: Sun