Back to the empty nest again....

There are no longer any of my children resident here at home. David has returned to the snowy south, and a new university term, and happily, there were no disasters awaiting him. I had visions of burst pipes etc etc. As there are more bouts of extreme weather around the corner, it seemed a good idea to get him back while the roads were reasonable, but the whole of the south east is blanketed in snow. And fog. And I think the highest temp reached was 1C. Almost tropical! 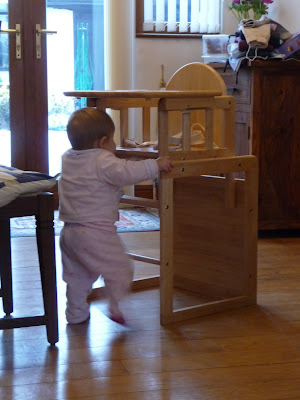 There was also a brief visit to cheer me up as well - to watch Missy re-arranging the furniture while we had coffee. The child moves at the speed of light, and three quarters of the photos have some blurriness in them. She is up and moving all the time! 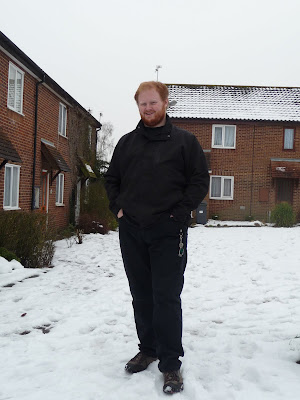 Snow. And David. He stocked up with food, and we took a trip up to the university to see what the roads and pathways were like. Roads were fine. Pathways not. And it is at the top of a steep hill, so I have a suspicion he will be using the bus till everything thaws. I think he looks rather happy to be back, don't you??! 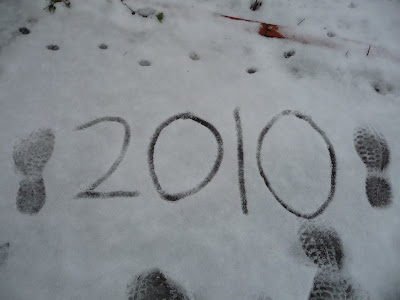 He left his mark on the driveway at home. Footprints! 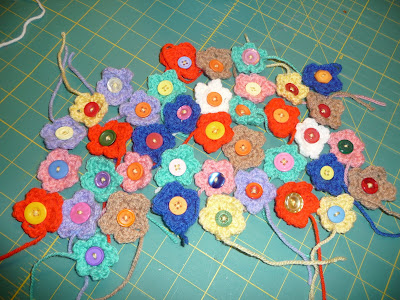 And here are some of my flowers. I made a whole lot more last night as well. This crochet lark is highly addictive. 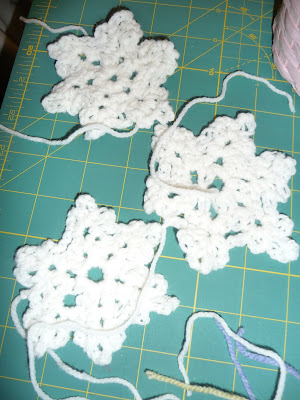 And 3 of the snowflakes. They still have to be pinned and starched and then they will be done. They look complicated to the novice, but actually were quite simple to make. After a few failed attempts, that is.
And so now I am going to make more coffee, and curl up on the couch and do nothing. Maybe a few more flowers. I need a nap. The thaw may have started, but it is still perishingly cold.
Posted by Linds at 6:25 pm

You guys have really had a winter for records this year!!!! It is an amazing amount of snow.

I see the blur in Missy. Too cute. Aaahhh....for that energy again.

Love all of your crocheted flowers. What will you do with them?

Those crocheted items are sweet! The flowers would look lovely on a hat or scarf - just saying, you know :)) I hope David's next term is a successful one - his second year nearly complete - my, time is flying by! So glad you got to see Missy - there can never be too many grandchild visits! The snow is still melting here but it's only January so we know it's just a temporary thing. Happy Week to You!

The crochet is coming along beautifully. Love all those flowers!

Yay for David's getting back to school safely. Yes, he does look rather happy about it. One does miss one's friends and the society of college.

Look at all that crocheting! You are a dynamo.

And a visit with sweet Missy, too. It's all good. (I used to put my camera on the sports/motion setting to hope to snag a photo of the grands.)

Lots going on - good stuff - well done. I reckon I could give those little crochet things a go ;) How about posting the how to do pattern - or whatever?

I love all the cute daisies!

Oh Linds, I can not believe how big the little one is, good grief, I feel like just yesterday you were telling us she was born. :)

Love the crochet, isn't it addictive?

I remember clearly the joy of getting back to college, even though going home was great.

I love Missy's high chair - have never seen one like it.

Come on over and celebrate the twins' birthday! Finally.