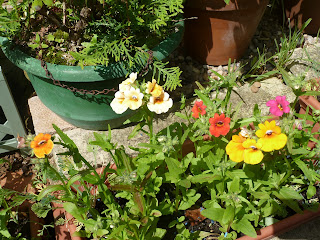 The sun has decided to shine ( albeit sporadically) today and my garden has finally woken up. It is such a delight to wander outside and see the little flowers starting to bloom all over the place. Colour at last! I am trying to restrain myself right now - I hate gaps, and , with a full-ish greenhouse, I could plug them, but I know the little plants will spread out and more than fill the gaps, but....... Sigh. That is just how I am. I want overflowing abundance in my garden. You know how seed packets say "plant 50cm apart". Hah. I always ignore that. So I have planters \t my door with 20 french beans vying for space, and they always do wonderfully well. I think plants are sociable. They don't like being alone. 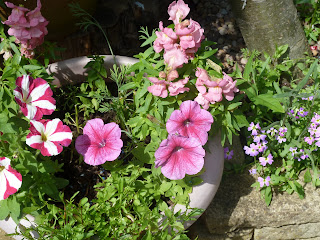 On a totally different subject, between writing the last bit and now, I have had yet another scam call from someone - always an Indian man - telling me that he is calling from Microsoft and warning me that there is something horribly wrong with my computer. The first call I had a few weeks ago, I called my son on my mobile during the scam call and he told me to put the phone down immediately. His neighbour had been a victim of the scam. And I have heard of more and more people falling for it.

Anyway, I told the man I knew it was a scam and put the phone down, then called Microsoft. As it happens, in India. But at least I know it was Microsoft. The lady I spoke to said it was a definite scam and she took all details and told me that Microsoft will NEVER call anyone direct. Also, she gave me the details of a website here in the UK Action Fraud and asked me to call and report it. So I did. The really helpful man said that this is a very busy and well  known scam and took all the details to add it to the police computer. The scammers apparently target areas, so local people, be aware, and please warn your neighbours and friends. Just tell the "man from Microsoft" that you are aware of the scam and put the phone down. There is nothing wrong with your computer.

I get SO MAD when I hear of scams and of people losing their money. Bigger screech. 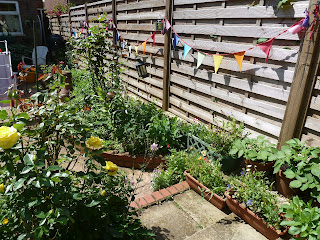 After a rocky few days, Glynis seems to be making progress at last. She actually called me yesterday, which was a sign of a significant improvement. She is still in hospital and I am off to play with her dogs in a sec. It will be so good when she finally comes home. We all miss her. The aqua ladies too. 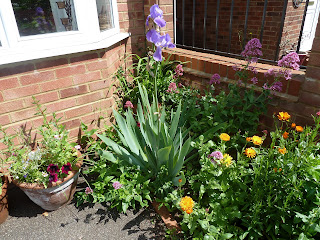 Speaking of aqua, Jean and I went along to the ordinary aquarobics class yesterday taken by the new teacher. Well. It was beyond dire, and we didn't know what we were doing. Absolutely awful and the music was appalling. I will give next Wednesday another try and may well switch to another day and another teacher. Our lovely teacher still takes the aquazumba classes, thank heavens. But the Wednesday one......hmmmm. Maybe she is just finding her feet. We will see.

I am quite sure I was going to write something edifying today. However, my brain has been scrambled by the fury, so it is probably best to report back in later when I have done a lap or 2 of the garden. I hope your Thursday is a happy one!

I am with you on the scammers. They are dreadful individuals!

Your gardens look beautiful with all of the colors. I am so glad the sun has arrived and made everything pop.

I hope Glynis continues to improve. It will be nice to have her home.

I wonder if it is possible to scam the scam man?

Have to laugh at Stripeyspots' comment - that would be interesting. Beautiful cheery pictures.

Your garden is looking beautiful, such pretty colors :)

Modern Bedroom said...
This comment has been removed by a blog administrator.
9:30 am