For Christmas a couple of years ago, I gave Glynis a One Line a Day Diary. She is so like me in that she wants to record her life in one crafty way or another - and I thought she would love it. She did/does. So, because I was not going to spend the money and because I wanted to do this too, this year I bought a notebook and started listing the days and making space for the years. Half way though the year, and I am doing fine. However, keeping one's daily entry to one line is slightly difficult. Impossible. 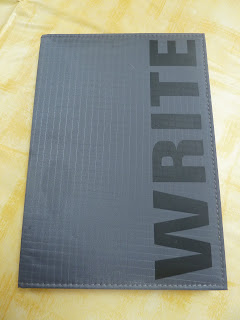 I was discussing the woefully wet and windblown (love the alliteration!) state of my garden with a friend over the weekend, and decided to go back here and see what last year and the year before and the year before that looked like, and 2 days later, after many happy hours reading about my life in past years, and remembering all the bits I didn't put into the blog, the light bulb started flashing in my brain.

I don't need a One Line a Day Diary. I already have something approximating that right here. Admittedly, it is not every day of every year, but it is close enough. And I already have over 6 years recorded here, with some photos too.

Do you ever think about that? Yes, of course, I evolved into a recorder of days/dreams/life/memories over time. At the start, it was just a way to stay in touch. Now, however, it is so much more, and when the muse takes a hike, and I cannot for the life of me think of what to write, I will remember the One Line a Day idea. I will carry on doing the notebook, though, because maybe that will act as a prompt when I can't think of what to talk about. And I like the notebook. AND it is lighter than a laptop, and carrying a laptop about the countryside is not for the weak and feeble. Not that I am in any way weak and feeble, of course, and I am trundling off at yet another tangent right now, but you know what I mean. That is why an iPad has such appeal at this precise moment. Another tangent.

But the notebook will slip into my bag, and it will do fine. 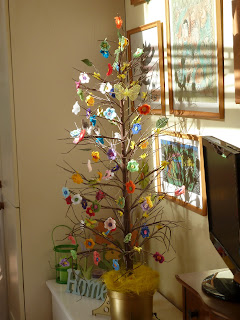 The weekend seems to have flown by so fast - there was a little sun, and a Saturday of no rain, so I spent most of it in and out of the garden taking out the dead and cutting back the broken after our Traidcraft Coffee morning. The wind did the most damage by blowing the young plants about and then creating holes in the soil around the roots and allowing them to be exposed to the less than tropical temps, I think. Anyway, the garden bin is filling up. There were many sighs of resignation, but my garden will keep growing I hope, and the gaps will be filled.

Yesterday, Jean and I were on coffee duty, so we hauled our numerous bags and carriers of cakes and goodies (mainly Jean's efforts) to church and afterwards, I went to her home for lunch and my first glimpse of her Nepalese photos. I want to see every single one. We are almost halfway through now and it looks absolutely stunning. Everest? Breathtaking.

Last night, I went to have supper with Peter, because he was following a recipe for cannelloni for the first time, and he did a wonderful job. It was delicious. I suspect there will be more recipe following in the days to come, and Glynis would have been totally impressed. She is slowly coming on. One step forward and 2 back at times, but we all remember the last time or 2 and this is the pattern of healing from a stomach op. In a way it is a pity she is down in London, because I can't pop in and see her, but in another, she gets very tired, so just having her family around her is all she can cope with at the moment. We all just want her to be healed and home and happy and healthy. Good grief. The alliteration bug is on a roll today.

The rain is falling, but there is no wind. The foul weather is set to stay for the rest of June apparently, but I try to ignore that little bit of information and rely on the state of the sky when I get up each day. Today it is wet. Very wet.

My friend, Crystal, is doing a "Lists of 2012" thing once a week on her blog. Lists can be so fascinating, and they show so much of who we are. I am not doing it, quite obviously, here at RCR, but I am doing it in another notebook. I love notebooks. The physical writing down of stuff is a real delight at times. Otherwise we will lose the use of the fingers and our handwriting skills will start to resemble those of a toddler. Hmmm. I could go off on another tangent here too.

So just think of some of these prompts -
In fact, each prompt could be the title of a really interesting post. I love lists. I make them all the time, and am well known for leaving the shopping list at home when I go shopping. So, when I was wandering about the halls of Amazon browsing, one cold, wet and windy night, I found a section of Listography journals, and ordered one, based on the reviews. It is designed for the young, I admit, but I can work around that.

Lists include:
Again, things to make you think, record, and then perhaps to write about. I think lists are fun. Have any of you ever bought a book of lists, or considered starting one? Apart from Crystal, of course! 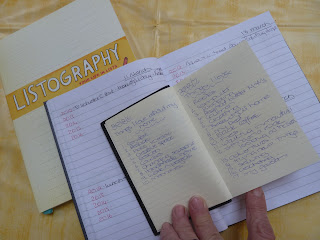 Ah well, enough of the chattering. I have some trousers to shorten for a friend's grandmother. And another crochet project to work on, and Glynis's dogs to look after and coffee to make and......
Posted by Linds at 12:12 pm

One line a day? I'd get totally bogged down in making it the best line of the day. I suppose that one would enjoy the freedom of being able to say what one isn't willing to say on a public blog. Then that would lead back to only one line a day?

Keeping Glynis in prayer. Stomach surgery is no fun. Hope that she'll be home with you all soon.

Some days one line would be far too much to tackle. Other days, not near enough space to write.

How on earth do you find time for all you do???

I do hope and pray Glynis recovers quickly! I know how dear she is to you.

We are alike in our thinking about lists, Linds! I love the notebooks you have and agree that it's so much fun to look back, read and remember. Please keep sharing your new ones!

The sun is shining here today but the forecast is grim. I really need to put some potatoes in the ground and it's awfully muddy here. I hope your plants recover and that summer soon arrives to stay!

Just wanted to say thanks to everyone praying for my mum. It's awful being too far away to visit and it helps to know that you're all out there praying away!

So many wonderful people all over the world praying for your Mum, Kate - we have her covered. Love you loads too.

I am terrible at making lists. I guess I always feel that unless I am "active" I must be wasting my time. One line a day would be tough!

I am sure that Glynis must be excited about getting back home again. I'm wishing her a speedy recovery.

Glad to hear Glynis is making progress - hoping for many more steps forward and less back. I am another list lover! Think I may have to play with some of those prompts.

Enjoyed the prompts...I need to play with them. I make lists on a regular basis tho most are "to do" lists. But it's a start.