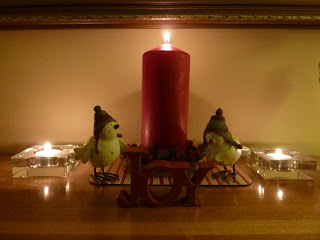 Seniors tennis from the Royal Albert Hall on the TV right now - such fun to see McEnroe and leConte again, and they play so well! We have been to watch there many years - I must add it to the "to do" list for next year again. If I remember where the list goes. I think 2 nights in London next December, some tennis, some shopping and a show would be amazing. Soaking up the atmosphere and going on another night time ride on the London Eye. I loved that. Watching the skating and eating out....... Yes. I think that sounds perfect.

It is a cold day today - I think winter may be on its way at last, and I would be on the couch starting another ripple blanket, if I could find some very dark brown wool. I can't. So it is going nowhere. And I am not on the couch. Maybe I will find some tomorrow. Or next week. Mum and I were in town at an early hour to find the socks my daughter needs (success!) and wool (failure) and that was the event of the day. But there is a crockpot bubbling away as I speak, with a pork shoulder steak/butternut concoction cooking. I tend to just toss in whatever is at hand and it always ends up being quite delicious, and the kitchen feels warm, and the house smells great.

The tree is still standing. I was skyping with Diana earlier and she was looking at the photos, and wanted to know who had "vomited bows all over her tree". Hah. She has such a way with words. I made the bows. I put them on and I LIKE THEM THERE. It just looked different to her. She is used to it being gold. It is not gold this year. It is a mix of whatever I felt like putting on it. Not a designer tree. Especially after the bonding episode!

In the end, she admitted that it looked fine. Oh, the relief. One's children don't like things to change, I have discovered. I was just glad Skype worked. In the middle of the call, my computer produced the blue screen of death and crashed. I have no idea why, but after I got it up and running, I made sure I had copied everything to the external hard drive. Now tell me, people, do you back up your external hard drive too? I had this sudden thought that everything important was on one disc, and then I had visions of me surrounded by 54 external drives all backing each other up.

This may be a little over the top, of course.

However, I do not want to lose any more stuff.

I don't make wish lists. Well, they would be a little pointless, wouldn't they - and when Geoff was alive, he was usually away at sea for Christmas. But while I was listening to friends discussing what they had put on theirs, I grinned, and mentally made a little list for myself. And today, I bought a bamboo crochet hook. It was on the list. Why? Because, apparently you can take bamboo knitting needles and crochet hooks on planes! Now that is a real essential. I gather they snap if you try to poke anything. My friend, Helen discovered this, and actually tried it out on her recent trip to America for the quilt show in Texas. Eureka! So, when I saw one in the wool shop, I grinned as I popped it onto the cash desk. I now own a bamboo crochet hook.

Do you do lists?

Later....the crockpot concoction was a triumph. Just delicious. I am now ready for a nap. And I may just try out my new crochet hook and see how it works. There is always something to make while we watch Strictly Come Dancing, isn't there?  (Happy smile!)
Posted by Linds at 4:56 pm

When I say Helen tried it I mean that she took bamboo needles with her, not that she poked anyone with them!

Thank goodness you clarified that!!

I love making wish lists, things that I would never in a million years be able to do, get or try. And if I could, I probably wouldn't, if you see what I mean! But I like making them just the same.

I'm off to do some backing up!

Oh I'm so missing Dancing With the Stars on Monday eves. I'm glad that you still have your Strictly Come Dancing. Diane's comments made me laugh. Adult daughters. Oh my! Yup. They can be so bold. Glad that in the end she liked the bows because they really look terrific.

I am not a list person. I always feel as though I am wasting valuable time to sit and write out lists.

Loved Diana's comment. It sounds like something my kids would say!!! They do hate change of any kind, don't they?