Morning all! Well, here I am, in central Switzerland, high up in the Alps near Luzern. I only managed to book a day or so before I actually left, and had to fly on a scheduled airline, because there was a shorter distance to walk at airports, and no mad scramble for seats, and the train connections worked well. In theory. There was fog at Heathrow, so we were delayed and hour, and I just managed to get the last direct train of the day. I was totally shattered, but hey, I got here, and my sister was on the station platform waiting for me. If I had missed it, I would have had to make 3 changes, and then get a bus, and lugging 20kgs of luggage, it was not an option. Susan? You may have met me sooner than planned! (And Thursday will be wonderful - I will email you!)

Switzerland is stunning all year round, but magical at Christmas time. The village is lit by thousands of little white lights everywhere, and I just love it. This place feeds my soul, but I may have mentioned that once or 470000 times before.

So I had a fairly quiet day recovering yesterday, and taking photos. It was cloudy, but I decided to walk to the mountain base, where my sister works, and, with my stabilizers, aka Leki poles, I managed to walk there and back! Slowly, and watching the snow and ice, and being ultra careful, but I WALKED there! It generally takes me 10 mins and yesterday took more like 40, but I don't care, because I walked. 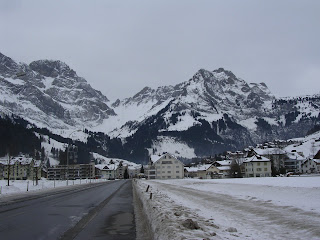 And today, as I look out of the window here, the fog is dissipating, and there is blue sky appearing, and the camera and I will be out there again. Oh yes we will. And yes, I did all the exercises, and rested too, after I baked the apple cake, because my sister does not bake, and the house needed to smell of Christmas, and that means baking. I brought my recipe books from home, and today I will start on the mince pies too.

My brother-in-law's restaurant is absolutely beautiful, and I am so thrilled that it seems to be doing really well so far. He and his cousin are loving having their own place, and with the ski jumping carnival of thousands arriving this weekend, they should be really busy. If - no, WHEN you come to Engelberg, you must go there to eat! 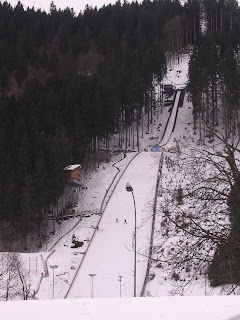 Can you see the men sweeping the ski jump landing slope? 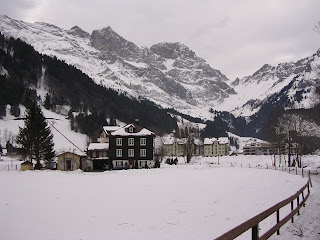 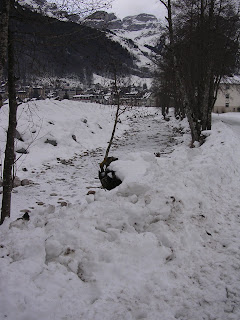 This is the path I took along the river back home. The river is frozen. This path goes to the bottom of the ski jump, and then I turn left to the house. 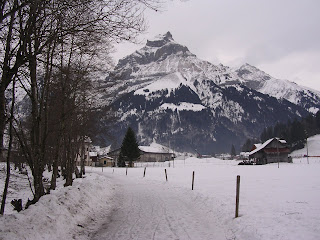 So. I am here. And the sun is rising above the mountains, and I will walk over to Marge again later. I can have a schalle there (latte) and watch the skiers come down the mountain. Sigh. Now i need to go and make some pastry. Oh does anyone know anything about baking at 1000m above sea level? Do I have to add extra baking powder? I am only asking because the apple cake was flatter than normal, although it still tasted great.
The fog is gone ...... I am off!
Posted by Linds at 8:49 am

Oh how beautiful Linds, I'm so happy that you are exactly where you want to be right now for the holidays.

Switzerland is absolutely good for you. It radiates from your posts.
Susan

It sounds magically beautiful there. I am so glad you have this wonderful time to be with your sister and soak up the love. Have a fantastic day today and the pictures are just beautiful!!! Looks like paradise to me.:)

Love and Hugs, Laurie in Ca.

What incredible scenery, Linds. It appears to be a magical place to visit.

There is something about altitude baking, but am not sure what it is. I know on cakes that one must bake it a few minutes longer.

Me again! Here is a link for high altitude baking, Linds.
http://www.ochef.com/327.htm

It's good to think of you being there in the bosom of your sister's home. Such beautiful photographs you've taken! And you walked? Out there in snow and ice? You brave, wonderful girl, you!

Oh my Lordy! This is gorgeous! My hubby has been there, skied the alps years ago but not mean. It is now on my places to visit list to be sure, especially at Christmas time. I hope you'll be posting more pictures! Beautiful!

Between yesterday's post and this one it is as though you have been transported to some magical place. It is all breath-takingly beautiful Linds. I am sure just being there is going to go a long way to helping you recover.
Enjoy every minute, and thank you for sharing this special time with us.

the voice of melody said...

Linds, I'm so glad that you made it there safe and sound. Those snow-dusted mountains are breath-taking! I just love to see the blankets of snow all over the landscape.

Your sister's house is beautiful and so festive, with all the Christmas decorations and, be still my heart.... all the villages! So quaint with the skiers too.

Merry Christmas to you and yours! :)

Makes our 3 inches of ice, sleet and a few flakes of snow look pitiful and anaemic.

It's so beautiful there, Linds. It must feed your soul to look at that scenery every day.

Enjoy your time with your family and have a joyous Christmas season, my friend. :o)

Let me know - I've got it free - the pics don't do it justice. I wish I could just load everyone I know over for a little mountain experience. Susan

OH, I can have a winter vacation with you just by reading and seeing your pictures. Thank you so much! Hope your baking turned out great. Enjoy, enjoy, enjoy!!!

I am jealous, my friend. Absolutely green. Bill and I both salivated over the photos. One day....

I am so thankful that you are there and feeling so rejuvenated. Even your knee!

I always have to add 2 tablespoons of flour and a bit more liquid to everything I bake here at 4700 feet (I'm not good at the metric system!)