Catching up with friends......

Today started with a message to say that Gill, a friend from my long lost youth, was hoping to pop in for tea this morning, and when I called to make sure they were coming, they were half way here, so the old Dyson and I had a speedy stint of exercise while I waved the other hand around clutching a duster mitt. And put out cups etc etc etc. 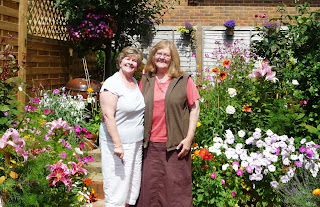 They were en route to Cambridge, so didn't have long to visit, but it was such a delight to see them all, meet the adult son I last saw, so help me, when he was about 3, and meet his lovely wife. Wife, for heaven's sake. That baby is married. An hour was simply not long enough, and we haven't even begun to talk about the children we have who were not physically present. She has 2 more grown boys, and we all know I have Andrew and Diana too.

We howled with laughter as I told the kids the story of how Richard, Gill's oldest son, and Andrew, who are the same age, managed to eat an entire pot plant when Gill and I went to fetch our coffee from the kitchen. It took a minute. They were at the crawling and pulling up stage, and there we were, 2 first time mums, screeching down the phone to the Children's Hospital poison line that our babies had eaten a pot plant. What kind of pot plant? Shriek. It was green, I don't know. What kind of leaves did it have? Screech, I can't remember and it is gone. Eaten. They have green faces. All that is left is a stalk. Do they seem well? Screech. They are laughing.

It was one of those moments. They lived. We started going grey right then and there.

The sun shone and the garden looked great, and it was just as if we had last seen each other a week ago. It always is like that with old friends, and that in itself is just wonderful. Hopefully we will be able to do some more catching up before she flies off home again to South Africa.

And then, David and i went to have lunch with friends in a village just across the county, which was lovely. I have not seen Matthew, my friend's son, for about 3 years, as he has been away at boarding school, and he too seemed to have grown into an adult in the blink of an eye. Time keeps marching on.

Our visit ended on a slight crisis point, when my phone managed to end up in the dregs of coffee. It was not a happy phone and went into a silent mode. Sulking, perhaps. David spent the journey home googling wet iPhones, and it had to work its little heart out trying SO hard to connect with satellites as we whizzed up and down through the countryside, that it heated up dramatically, and I do believe the heat sorted out any dampness problem, because it now works. Oh, the relief.

So today has been a day of catching up and much laughter. And the realisation that the years have flown by, and children grow up, but that some things - the friendships made when we were very young, they stand the test of time. Yet another thing to be immensely thankful for!
Posted by Linds at 6:58 pm

Sounds like a nice day apart from the phone crisis. I'm trying to imagine what happened ... all you say is that it 'managed to end up in the coffee'...

I think the wonderful visits made up for the dunking of the cell phone. Glad it all turned out okay.

Those short moments when we get to reconnect with friends from long ago are always really lovely aren't they! Glad you had such a nice day!

Oh what a fantastic day! All except for the meeting of the coffee and the cell phone. John's convinced he knows what you can do for that, but he can't quite remember. Sigh. Oh well, sounds as if you've got it figured out.

Pot plants? Here that means marijuana. You don't mean that, I hope. = }

Keep having fun. Hope that another old friend stops by soon. It's all great fun.

Plants in pots indoors. What do you call them? House plants? Hmmm. Plants in pots are pot plants to me. As opposed to THE OTHER kind of pot!!!

I think John may be thinking of rice. I googled what to do too, and they said stick the phone in an open bag of rice over night. Something else to file away somewhere!

My son once left his phone in his pyjama trousers pocket. (Phoning lady friend late at night.) And I washed the pyjamas. The phone survived.

You have had a lovely weekend! I'm glad the sun shone, friends visited, you enjoyed your garden and all is right with your world! May your week be filled with more of the same stuff :)

It sounds like it was a very wonderful day. Friends, cell phones that are tougher than reported, sunshine, and memories!

You've got to just love those kinds of days!